DRAMA IN WORSHIP AT FPC

September 09, 2015 by admin in Uncategorized

From the Article in the “Epistle”, the newsletter of the First Presyterian Church of Bonita Springs, September-October 2015: 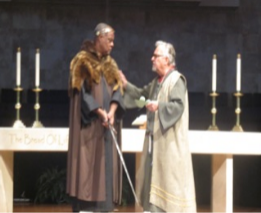 “The Drama Ministry at FPC is based upon the following principle,” Delvyn explained, “its purpose in corporate worship is to glorify God by depicting His story in the lives of His people. Our goal here is to glorify God through our work on stage… and backstage.”

He said that last September the drama ministry with an organizational meeting attended by an eager group of actors and technical crew. The first production took place on Reformation Sunday in October — “Martin Luther at the Diet of Worms: Day of Decision,” with Jerry Weisenauer, Nancy Janek and Charley Nevaril as Martin Luther. This five-minute drama was well-received, as were successive productions, including one on February 15, “Valentine’s Day 269 A.D.”

“Members of the congregation each received a Valentine card with a Christian symbol and explanation on it, Delvyn recalled. “They represented those given to St. Valentine when he was imprisoned in Rome. The first Valentine cards!” 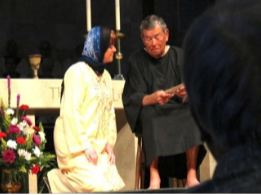 With Jerry Weisenauer as Valentine and Christie Shore as Priscilla, children from FPC also took part in the production. They handed cards to Valentine on stage as the children did in a Roman prison in the third century. Delvyn hopes to continue to involve our children as well as our youth in the Drama Ministry this coming season.

Next was a production of “The King of All Kings” during the men’s weekend of the Great Banquet. This play depicted Elvis receiving a Grammy Award for gospel music and his testimony of Christian faith.

In March, “St. Patrick 440 A.D.” with Jerry Terry and Charley Nevaril taught the congregation learned how Patrick used the shamrock to teach the people of Ireland about the Trinity. The season ended with the Maundy Thursday production of “One Man, One Table,” a one-man play depicted Judas returning to the site of the Last Supper.

“We are developing an energetic fellowship of talented individuals to serve the church through drama,” Delvyn said. “We are open to new people stepping forward to try their talents on stage or backstage in the areas of acting, staging, set design, costumes and make-up.”

Plans for the upcoming season include a play on John Wycliffe in November and one about the writing ofan American Christmas carol for December. Additional plays are being developed based on the Pastor’s sermons and Holy Week.

“We would love for more individuals to step forward and get involved,” Delvyn added. “The commitment usually requires only a few hours during the days before each performance and is lots of fun to work together!”