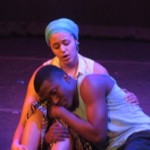 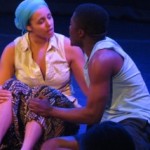 NYARING added “dramatic gravitas” according to The Portland Phoenix, March 4, 2015 to The Maine Dish, 12 plays about food produced by Snowlion Repertory Company, staged during Maine Restaurant Week March 1­14, 2015. My play NYARING concerns two South Sudanese siblings running (“nyaring”) to be reunited with their parents. During the play, the two children eat grass—all they can find to eat. The play begins with the sound of AK­47s as the children enter, and ends with AK­47s as the children exit. For the children it is a life ­and­ death situation as they flee the devastation of civil war and hope to find shelter at a U.N. refugee camp. NYARING was very well received not only for its dramatization of particular cruel events but for its universal themes of civil war, fear, starvation, separation of families, and impact upon children.

SAINT PATRICK 440 A.D.: MISSIONARY TO IRELAND
Reflections: When I want to find meaning in life, I go to a funeral