Can you imagine two gravediggers dramatizing an important event in the history of the early Reformation and Bible translation?  in my play SCATTERED ASHES, Charley Nevaril and Jerry Terry, two terrific actors, played the roles of these unsavory characters in 1425 digging up the bones of John Wycliffe who had translated the Bible into English.  They riff about how this will stop the dissemination of Bibles in England in the production that took place at the First Presbyterian Church in Bonita Springs, Florida on November 8, 2015.  With laughter from the audience/congregation at Charley scratching his back with a bone or forgetting the skull, the audience/congregation learned a number of important truths about this time in Church history.  Several of the scenes from the production are depicted here.  A video of the production will be available soon.  SCATTERED ASHES is available on my website and is available for a production at YOUR church.  Make the congregation laugh—make them learn.  Incidentally, 200 years later Wycliffe’s banned English language translation of the Bible became the basis of the King James Version of the Bible. 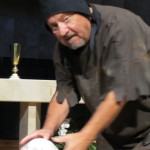 From the play “Scattered Ashes”, performed in Bonita Springs, FL 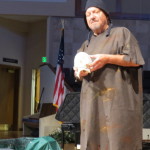 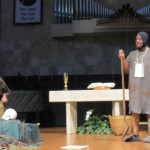 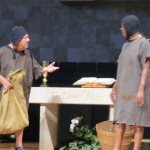 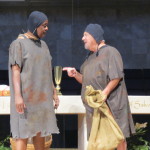 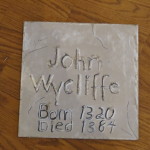 Writing Great Plays Part II
From the Portland Press Herald: Reflections: Man looks at the outside, but the Lord looks at the heart