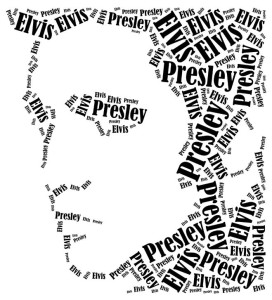 Elvis received 14 Grammy Award nominations for his recordings of pop, country, and gospel music. Yet he received only 3 Grammy Awards. All 3 were for gospel music. Why? All three were given later in his career when he was struggling with many personal and professional demons. In his white jump-suit opened all the way down to his navel, he looked like a caricature of himself. His public appearances became erratic in the ’70’s. He even left the stage in Baltimore in 1977 during an embarrassing performance. What was it about his gospel music that was real even to a secular group of musicians voting for the Grammy Awards? His gospel songs were about his Christian faith. Despite his struggles, the light of his faith was trying to shine. How are we doing? Does our faith shine despite our struggles. Do others—not just Christians—see our faith through what we do and say? Elvis always claimed gospel music was his favorite kind of music—through that kind of music, the authentic Elvis was visible.

From The Portland Press Herald – Reflections: In times of stress, turn to prayer and let God handle things
ATTENDING REHEARSALS at the Theater At Monmouth