THE TEXT IS ONLY THE BEGINNING

In a New York Times review (11/12/15) of a New York production, the reviewer makes this very illuminating comment, “Ms Lloyd’s “Henry IV” is, among other things, a celebration of the metamophic wonder of live stage acting, and of the distinctive insights it affords as we watch people transform themselves into others.”

Isn’t that the truth? A play starts with a text, but that is only the beginning. It’s then the actors with their interpretation of the text, along with their movements and emotions that propel the work into THEATRE. But it’s not only that. As director, I also see others involved in a production make the play a wonder. Watch the set designers. Witness the excitement in their faces they put together the staging, as in the recent production of my play SCATTERED ASHES in Florida. The set designers built right in the church an open grave and a graveyard, that made a wonderful contribution to the production! 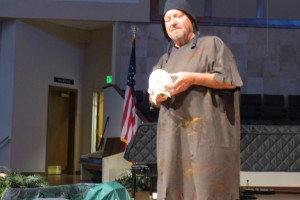 An open grave with a skull on top right on stage! THE EXCITEMENT OF THEATRE! What about costumes? In our production the costume designers transformed two actors arriving for rehearal in tee shirts and jeans into 14th century grave diggers. What MAGIC! And makeup. The actors had to look like they had already dug a few graves before they reached John Knox’s grave to finish their jobs. Lighting? An important key to any production. Over the years ofdirecting my plays in Portland, Maine, the lighting technician in charge of the spot had some of the best comments and criticisms that really fueled the finished production. Don’t forget sound. Most of large spaces like a sanctuary in a big church need amplification. Sound is key. If you don’t hear the lines…

WONDER in theatre is live stage acting but also the COLLABORATION of all involved in a production. So when the audience looks and listens, they experience THEATRE.